The male genito-urinary apparatus is composed by a series of anatomical districts and structures in charge of both reproduction and urination (elimination of urine). It consists in the testicles, i.e. the male gonads, enclosed within an ovoid structure called scrotum. The function of these structures is the formation and transportation of sperms inside the seminiferous tubules.

Around the seminiferous tubules are cells (interstitial Leydig cells) in charge of secreting testosterone. Once produced, sperms enter the sperm ducts where they mature and later reach the ejaculatory tracts and then the urethra. The urethra is the tube extending from the bladder along the penis and it allows discharge of urine and semen. Finally, the penis is the copulatory apparatus, almost cylindrical in shape, terminating with the glans where the final part of the urethra is located. Along the penis are also other structures surrounding the urethra, called corpora cavernosa, that when filled with blood lead to an erection. A very important gland part of this apparatus is the prostate, with the function of producing seminal liquid, essential to convey sperms. If inflamed or swollen, interferences occur with both the physiological functionality of urinating as well as with the capability of having sexual intercourse.

Maintaining these apparatuses in good health is therefore essential for the body’s general health and is also functional to ensure a normal sexual life. As is well known, problems related to deficiencies in this area cause psychological issues as well, particularly in young men.

Benign Prostatic Hypertrophy (BPH) occurs when the prostatic gland starts to swell around the age of 40, causing the urethral canal to shrink. Around 70% of men aged over 60 are affected by this problem. The prostate is a small chestnut-shaped gland, its tip pointing downwards, on which the bladder – located right behind it, rests. Its gland cells produce and store the seminal fluid nourishing sperm.

With the ageing process, the central part of the gland tends to expand excessively. The reason for the prostatic gland’s swelling is to be traced in different factors, such as loss of elasticity in the prostatic tissue, possibly related to previous, not adequately cured infections (such as prostatitis), causing the formation of fibrotic tissue in the gland; another decisive element is the increase in the activity of 5-alpha-prostatic reductase, transforming testosterone in metabolites (DHT, dihydrotestosterone, a hormone that is active on the prostatic gland’s cells), enlarging the prostate.

In young men with intestinal problems (such as constipation, Candidiasis, colitis, etc.), the development of bacterial infections of the prostate (prostatitis) is anything but rare, yet not always adequately diagnosed. This way, neglected acute prostatitis easily become chronic, resulting in one of the main causes leading to the the onset of prostatic hypertrophy in the years to follow.

With regard to how pathogenic agents actually manage to reach the prostatitic tissue, transparietal lymphatic passage from the rectal ampulla is one of the most common occurrences. This means that intestinal hygiene, obtainable through a correct diet, is one of the fundamental aspects to be borne in mind when treating prostate-related problems.

Moreover, the rise in cases of prostatic hypertrophy taking place in recent decades is attributable to the increasing use of artificial chemical products and of steroid hormones in agriculture and farming. All this leads to the compression and shrinking of the urethral lumen and to the consequent insurgence of problems mainly related to urination disorders, since sperm passes through the same channel (the urethra) as urine; but there is also the risk of serious and irreversible damage caused to both bladder and to kidneys in the long run.

Most typical symptoms, essentially characterised by the “difficulty” to urinate include: increased frequency of the need to urinate, day and night; reduced pressure of the ureteral jet, intermittent urination and the feeling of incomplete emptying of the bladder. With the greater effort required to expel urine, the bladder walls tend to tire out, with bladder functionality increasingly compromised. Moreover, stagnation of urine in the bladder can trigger irritative phenomena, the formation of bladder stones and bacterial proliferation, leading to infections (e.g. cystitis, urethritis and prostatitis), which in the worst cases can spread to the kidneys, as well.

As the organ in charge of sexual functions – it is, in fact, necessary for ejaculation, with sperm passing through the urethra, the same channel used by urine – malfunctioning of the prostate due to neglected prostatic hypertrophy, together with infections that could result therefrom, consequently leads to a series of disorders and dysfunctions related to the sexual sphere (decline in sexual desire, impotence, erectile dysfunction, retrograde, absent or precious ejaculation). Erectile difficulty after the age of 40 depends on organic causes in 65% of cases (BPH and prostatitis neglected in time), whereas the drop in testosterone is directly connected to the decline of sexual desire, accentuated by ensuing psychological implications. For this reason, it is essential to take timely action as soon as disorders related to the cervico-urethral shrinking appear, caused by benign prostatic hypertrophy.

Conventional medicine deals with benign prostatic hypertrophy with the aim to help the patient urinate, by means of a pharmacological approach or through surgery. Pharmacological therapy is based on two different actions: on the one hand using medicines that prevent the gland from growing excessively; on the other they act on the bladder neck’s muscle structure, increasing its openness and improving the ureteral jet. These two actions are often combined, yet this type of medical treatment is likely to fail.

Medicines based on antibiotics aren’t free from side-effects, such as frequent sensitisations, besides the insurgence of problems of resistance. α-blocking medicines and inhibitors of 5-α-reductase cause drowsiness, asthenia, depression, headache, rhinitis, diarrhea, besides the far more serious retrograde ejaculation.

5-α-reductase inhibitors, almost always prescribed in assocation with α-blocking medicines, generate a long series of unwanted, even serious side-effects: principal side-effects involve the genito-urinary apparatus, to the point that almost 4% of individuals undergoing clinical examination have not managed to complete the test due to such side-effects.

In addition, the following consequences have been registered: hives, exanthem, itching, swelling of lips and face, enlarged breast, testicular pain and, related to the use of finasteride molecule, breast cancer. In conventional medicine, whenever pharmacological treatment fails or in serious cases of prostatic hypertrophy, surgery is considered to be the only option.

This is why it is important to have valid alternatives available in the treatment of benign prostatic hypertrophy. Nature can once again come to our aid, offering ingredients of proven efficacy.

The expression Benign Prostatic Hypertrophy (BPH) refers to a swelling of the prostatic gland, a physiological event starting around the age of 40 and gradually degenerating (around 70% of men aged over 60 are affected by this problem).

With the ageing process, the central part of the gland tends to expand excessively. This leads to compression and shrinking of the urethral lumen, with the consequent insurgence of problems mainly relation to urination disorders, serious and irreversible damage to the bladder and to the kidneys in the long run, as well as sexual dysfunctions. The most typical symptoms, essentially featuring a difficulty to urinate, comprise: increased frequency of the need to urinate, day and night, diminution of ureteral jet pressure, intermittent urination and a feeling of incomplete emptying of the bladder.

The reason for the prostatic gland’s swelling is to be traced in different factors, such as loss of elasticity in the prostatic tissue, possibly related to previous, not adequately cured infections (such as prostatitis), causing the formation of fibrotic tissue in the gland; another decisive element is the increase in the activity of 5-alpha-prostatic reductase.

Nature can be of great help, once again, through the association of tradionally employed plant extracts with the extraordinary, broad spectrum antimicrobial properties of Grapefruit Seed Extract (GSE), ensuring an effective approach in the handling of benign prostatic hypertrophy.

Broadspectrum, antimicrobial efficacy of Grapefruit Seed Extract (GSE) has been proven by Laboratories, Institutes and Universities worldwide, making it a particularly active and effective element towards microorganisms responsible for prostatitis, frequent urinary infections and benign prostatic hypertrophy, as well.

GSE is absolutely safe to use and its efficacy can be considered decisive, since its antimicrobial action comes with the rare quality of selectivity: in fact, GSE is active against pathogens but does not significantly affect physiological, bacterial flora while preserving the organism’s natural defenses, as confirmed by a study published in the “Journal of Orthomolecular Medicine”, n° 5 of 1990.

For the above reasons, GSE therefore represents the cornerstone of an extraordinarily effective approach against benign prostatic hypertrophy. Its association with specific plant extracts enables to act at systemic level, with a product that can:

Grapefruit Seed Extract: as already highlighted, results obtained with regard to the efficacy of Grapefruit Seed Extract (GSE) against over 800 bacterial strains, numerous viruses and over 100 strains of yeasts, confirm GSE to be the ideal remedy to fight microorganisms involved in benign prostatic hypertrophy. Its synergical action with specific plant extracts, with beneficial virtues towards this pathology, makes the formulation effective and safe to use.

Serenoa: among its most important chemical constituents there are several sterols (including beta-sitosterol), free fatty acids, carotenoids, essential oils and polysaccharides. Efficacy of its action is due to the synergy of different mechanisms of action: inhibition of 5 – alpha-reductase, local selective antagonism of the link between dihydrotestosterone and the receptor for androgens; antiestrogenic effect, given by the strong reduction or receptors for estrogens; anti-inflammatory and antiedemigenic action.

Maca: rich in amino acids, essential fatty acids, vitamins (B1, B2, B12, C, D, E), mineral salts (calcium, iron, phosphorus, copper, potassium, magnesium, zinc). The sterol fraction shows presence of 5 elements, among which beta sitosterol represents the one at the highest concentration level (45,5%). In this formulation it serves two main purposes: acting as an aphrodisiac and for the treatment of impotence (due to the high p-metoxybenzyl isothiocyanate content); it moreover improves urination and cures benign prostatic hypertrophy.

Urtica: extract titrated at 0,4% in beta sitosterol, it reduces the volume of the prostatic gland affected by benign hypetrophy by 70%, inhibiting prostatic cell growth.

Oats: a plant rich in group B vitamins, pantothenic acid, enzymes, minerals (calcium and phosphorus), various oligoelements, an alkaloid (avenalin) and salicylic acid. It rebalances male hormones, increasing sexual desire and performance; it has an anti-inflammatory action on prostatic tissues, good diuretic action and, as shown by some scientific experiments, in association with Serenoa serrulata it helps reduce the dimensions of an enlarged prostate.

Fermented rice starch: obtained from fermentation of rice starch through Aspergillus oryzae, it contains enzymes for the digestion of carbohydrates, proteins, fats and lactose. In this specific product, fermented rice starch serves the purpose of improving levels of absorption and activity of beta sitosterol.

Fructooligosaccharides: with their prebiotic action, they promote the growth of beneficial bacteria at intestinal level, therefore countering the proliferation of bacteria and parasites that reach the prostate through micro-perforations in the intestine, causing prostatitis. Reestablishment of normal, physiological bacterial flora ensures rapid healing.

The ideal means of intake for these ingredients is a swallowable tablet.

The association of these ingredients, essential for a decisive approach against benign prostatic hypertrophy, can be further supported by specific remedies indicated for: 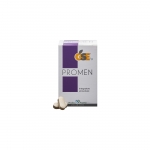