A good diet and an efficient digestive process are essential to be in good health because we are what we eat, but most of all, we are what we manage to absorb. Long term good health depends on healthy nutrition, on an adequate digestive process and assimilation of foodstuffs; over time, gastric problems and incomplete digestive processes lead to several chronic disorders (gastritis, reflux, constipation, meteorism, occasional diarrhea) and other serious diseases (food intolerances, diseases from immune-complex deposition, liver overloaded with toxins, etc.). The primary function of the gastrointestinal system is to dismantle complex molecules so that nutrients deriving from foodstuffs, which would not be usable or absorbable at native state, are made bioavailable. Gastric and intestinal problems are very widespread.

Inflammations and damage of the gastrointestinal mucosa, responsible for the insurgence of gastritis and ulcers, affect large groups of people: around 70% of adults frequently experience heartburn and 50% of people aged over 45 suffer from chronic gastritis; moreover, 10% of the population, especially those aged between 30 and 50, show clinical signs of peptic ulcer, single or multiple. Intestinal dysbiosis is, on the other hand, at the origin of the most diverse health problems, ranging from Candida to an unbalanced immune system that can lead to frequent illnesses, several disorders of the intestine, food intolerances, etc.

Inflamations and lesions of the gastroduodenal mucosa, responsible for causing gastritis and ulcers, are much widespread problems: around 70% of adults often experience heartburn and 50% of subjects over 45 suffer from chronic gastritis; additionally, 10% of the population, especially in the age range between 30 and 50, show typical clinical signs of peptic ulcer, either single or multiple. Their incidence is much greater among men (four times as much compared to women); however, in recent years there has been an increase in cases registered regarding women.

The insurgence of inflamatory, harmful phenomena affecting the gastroduodenal mucosa is attributable to multiple factors. In general, however, regardless of the triggering factor, what underlies the problem is the inability of the gastric mucosa to maintain the balance between “aggressive” factors Dominance of the former over the latter, in fact, triggers the gradual lesion of gastric wall layers, causing gastritis (inflammation of the outer layers of the gastric mucosa) and possibly evolving towards peptic ulcers (deeper erosions), typically located in the stomach (gastric ulcers) or in the duodenum (duodenal ulcers).

Aggressive factors are principally secretions of hydrochloric acid and pepsin, produced by the stomach to carry out its primary physiological functions (breaking down of proteins and defence against pathogens). In normal conditions, the stomach’s mucous membrane is capable of defending itself from the corrosive action of gastric juice, owing to the secretion of the layer of protective, alkaline mucous and thanks to the physiological regulation of intragastric pH levels.

Further protective factors are the rapid cell renewal (enabling rapid reparative actioni in case of lesions), and an adequate submucosal vascularization. Correct functioning of protective mechanisms is influenced by prostaglandins, chemical mediators playing a key role for the secretion of alkaline mucous, vascularization and stimulation of rapid cell turnover. Whenever efficiency of protective mechanisms is undermined, the resulting imbalance gradually triggers phenomena that erode the mucosa.

Collapse of defensive mechanisms is mainly attributable to the following detrimental factors: stress, unhealthy eating habits, smoking, Helicobacter Pylori infection and medicines, particularly non steroidal anti-inflammatories (NSAIMs). Stress is a key factor in the pathogenesis of ulcers and gastritis, a fact confirmed both in terms of incidence of the phenomenon among men (gastro-duodenal ulcer is an illness of the Western civilization, typical of active men), as well as being evident in the increase on cases among women, whose working, social and private lives have changed considerably in the past decades. The role of Helicobacter Pylori in the pathogenesis of gastritis and ulcers has been widely acknowledged.

The bacterium, present in 90% of gastritis and 70% of ulcers, colonises the mucosa, thereby determining the mechanical destruction of its protective coating and exposing the stomach wall to corrosive action carried out by gastric juices. Abuse of aspirin and other NSAIMs has been associated with a significant risk of incurring in gastritis and peptic ulcer; these medicines, in fact, exert their anti-inflammatory action by inhibiting synthesis of prostaglandins, triggering a set of harmful mechanisms acting against the gastro-intestinal mucosa.

Lifestyle adopted also has a significant part to play, particularly when there is abuse of alcohol and coffee, smoking, diet dominated by refined foods, poor in fibres and consumption of foods to which one is intolerant (which determines release of histamine, stimulating acid secretion in the stomach).

Symptoms and course of illness

Symptoms of lesions and inflammations of the gastroduodenal mucosa are typically: epigastric cramping pain, burning, heaviness in the stomach, difficult digestion, belching, nausea and vomiting. Haemorrhagic complication can be macroscopically present (blood vomiting or blood in the stools), or it can even be occult: in such case, loss of blood is minimal but equally dangerous, precisely because difficult to detect.

Gastritis and ulcers are pathologies that tend to chronicity, with continuous exacerbations intervalled by temporary periods of stagnation. In the worst cases, potential complications include perforation, gastric obstruction and neoplastic transformations (atrophy, dysplasia).

In official medicine it often is the case that the method by which an attempt is made to solve a pathology does not take into account potential ensuing negative effects. Unfortunately, this situation applies to current treatment recommended to cure gastritis and ulcers, involving the use of:

A different approach is therefore necessary, aimed at rapidly solving acute phenomena, yet without interfering with physiological secretory mechanism and capable of preserving the efficiency and balance of the entire digestive tract.

Nature can help you in case of gastritis and ulcer

In official medical pratice, ulcer and gastritis are almost always dealt with using substances that hinder the production of digestive juices or stem and stop gastric acidity directly; in both situations, while the problem apparently seems to be solved, in actual fact the delicate digestive and gastric secretory mechanisms turn out to be significantly altered, the whole apparatus’s balance consequently jeopardized.

This type of approach, together with the much widespread use of antibiotics to eradicate Helicobacter Pylori (often involved in the genesis of lesions) lead to side effects compromising secretory physiological mechanisms and gastro-intestinal functionality in general.

Hence, there is need for a different type of approach – one that is both effective and that can ensure definitive solutions, in order to treat the acute episode rapidly, while promoting natural protective mechanisms of the mucosa and preserving both efficiency and balance in the entire digestive tract.

It must be clarified that the approach mentioned here acts against the disorder (gastritis and ulcers) but not on its causes. It is therefore be necessary to improve one’s diet and adopt a more peaceful lifestyle, reducing stress causes and enabling the body to better respond to aggressive factors. Where Helicobacter Pylori is involved, instead, a more specific approach is recommended.

Once again, Grapefruit Seed Extract can be of great help, not only for its marked, broad spectrum antimicrobial activity, but also because of its recently discovered cytoprotective properties, particularly marked with regard to the gastric mucosa.

Grapefruit Seed Extract (GSE), known for its antibacterial, antifungal, antiviral and parasiticidal properties, recognized by Laboratories and Institutes worldwide, has been recently employed by a group of researchers at the Jagiellonian University Medical College in Krakow (Poland), with the aim of studying its potential properties with particular reference to the protection of the gastrointestinal mucosa. Studies have confirmed the researchers’ hypotheses, highlighting both the gastroprotective role of Grapefruit Seed Extract, as well as its ability to accelerate wound healing.

GSE’s mechanisms of action have been shown to be as follows: activation of the endogenous synthesis of prostaglandins, the expression of mucous cell growth factors, suppression of oxidative stress and an increase of submucosal bloodstream. These discoveries, together with the well-known antibacterial properties towards Helicobacter Pylori, intensify the protective and reparative action of Grapefruit Seed Extract towards the gastric mucosa.

GSE is absolutely safe, particularly because its activity has no impact whatsoever on the microbial intestinal flora – as confirmed by a study published in the “Journal of Orthomolecular Medicine”, Volume 5 Nr. 3 of 1990, while safeguarding the organism’s natural defenses.

For the above-mentioned reasons, GSE therefore represents the cornerstone of an extremely effective approach to handle the problem of gastritis and ulcer. The association and synergy with specific plant extracts enables to act at systemic level, with a product capable of:

promoting reparation of damaged mucosa, restructuring and protecting the epithelium – thereby reinforcing its defensive mechanism against aggressive agents, blocking haemorrhages, promoting cicatrisation of lesions, soothing inflammation and, to complete the approach, alleviating the anxiety factor, which contributes in a significant manner to the onset or aggravation of gastritis and ulcer.

Nature can help you with…

Grapefruit Seed Extract: as already pointed out, results obtained regarding the efficacy of Grapefruit Seed Extract (GSE) in its protective (and reparative) action on the gastric mucosa (besides its well known activity against Helicobacter Pylori, confirm GSE to be the ideal remedy in case of gastritis and ulcer. Also useful as a preventive measure, particularly in case of prolonged intake of medicines (especially anti-inflammatories), which can cause damage at gastric level due to their action on the organism.

Centella asiatica: traditional uses of Centella as a cicatrizing and vascular-protective agent have highlighted its marked properties with regard to restructuring, regenerative processes of the connective tissue. Scientific researches have emphasised the fact that the plant’s phytocomplex (among which asiatic and madecassic acid and one of their glycosides, namely asiaticoside) induces the stimulation of both the amorphous matrix constituents of connective tissue, namely glycosaminoglycans, as well as of the fibrillary components collagen and elastin, accelerating wound healing processes.

In this approach, its use is particularly precious to restructure and reinforce the gastrointestinal mucous barrier, ensuring protection from aggressive factors as well as accelerating wound healing processes.

Laurus nobilis (Laurel): rich in aromatic substances with antispasmodic and digestive properties, Laurel contains high quantities of pectins, mucilages with a buffering, protective action on the gastric mucosa. In fact, once hydrated, pectins adhere to the stomach walls, increasing its resistance against both endogenous and exogenous harmful agents.

Lythrum salicaria: it has marked antihemorrhagic properties, since the synergic action of ingredients contained in its phytocomplex, particularly tannins and the glycoside salicarin, besides relieving the inflammatory state of the gastrointestinal mucosa, promotes haemostasis of lesions, preventing onset of any hemorrhagic complications.

Boswellia: besides the well known aromatic properties of its resin (incense), Boswellia extract contains a number of substances, called boswellic acids, with marked anti-inflammatory properties. Recognised mechanisms of action are both the inhibition of inflammation mediators, as well as its blocking the release of elastase, an enzyme responsible for the destruction of collagen and of tissues involved in inflammatory processes. Compared to traditional anti-inflammatories (NSAIMs), it does not induce gastric intolerance; on the contrary, it shows protective action towards ulcers and gastritis.

Passiflora: given the relevance of stress and anxiety in the insurgence of ulcers and gastritis, Passiflora turns out to be particularly indicated, owing to its well-known sedative and calming properties; moreover, its recognized ability to calm down gastrointestinal spams enables to obtain a pain-killing effect, as well.

The ideal form of intake of such plant ingredients is represented by swallowable tablets, to be taken preferably away from meals, to help their direct action on the gastric mucosa.

The association of the above-described ingredients, essential to ensure a definitive approach to solve the problem of gastritis and ulcers, can be further supported by specific remedies, where necessary, particularly indicated for: 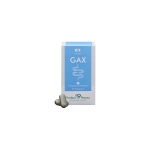 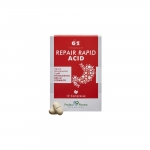 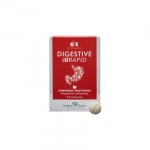 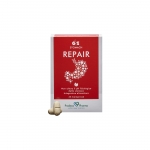