Menopause is a natural physiological transformation in the life of every woman, characterised by a substantial reduction of ovarian activity leading to termination of the monthly menstrual cycle.

The term “menopause” comes from the Greek “menos”, month, and “pausis”, termination; therefore it means “termination of menstruation”. A woman is officially considered to be in menopause one year after her last menstruation. The period of one year is based on statistics and relates to most women, but not all: there are, in fact, cases in which the menstrual cycle reappears after 15 – 18 months. The period preceding termination of the menstrual cycle is called pre-menopause and is rich in symptoms; during the following period, however, called post-menopause, symptoms are generally reduced but risk of degenerative diseases still remains (for instance, osteoporosis).

During menopause, the drop in the level of hormonal components, vital in ensuring turgidity and elasticity of the genito-urinary mucosae, makes sexual intercourse difficult and painful at times, exposing the body to the risk of cystitis and vaginitis.

Inadequate hormonal levels deprive receptors, which are normally abundantly present in the vaginal mucosa, of their lifeblood. As a consequence, vaginal epitethelium cells tend to become thinner, gradually losing turgidity and smoothness; this is coupled with a reduction of glycogen available, which is the vaginal flora’s nourishment, making it inefficient: with less nourishment, it can no longer provide adequate quantities of the lactic acid requiredfor defensive purposes.

PH levels inevitably rise and so does the risk of contracting infections, while lubrification diminishes. Vaginal secretion is, however, fundamental to ensure wellbeing of the vulvar ecosystem as well as a satisfactory sex life. Good lubrification is perceived as a sign of youth, femininity and perfect sex life.

On the contrary, dryness is such an intimate subject that it is often experienced with a feeling of shame, particularly during menopause. During this delicate period, in fact, ovarian activity is slowly depleted, with menstruations and reproductive capacity eventually coming to a standstill. At genital level, unease during sexual intercourse is accompanied by atrophy in the vaginal mucosa, burning, itching and at times blood loss. Recent market studies have shown that women suffering from vaginal dryness do not really know where the disorder comes from and are very reluctant to mention the topic, not only with their partner but also with doctors or pharmacists.

Many women think the disorder is connected to ageing or believe it is a consequence of a serious illness or even a sign of psychological problems. Vaginal lubrification, as such, is experienced as a shameful or taboo topic, belonging to the erotic sphere or to psychophysical well-being. Because of this, they try out “homemade solutions” such as using their own saliva, kitchen oil, various creams or common Vaseline. Shame, taboo, inhibition, unease, restlessness, a feeling of inadequacy become phases of a regressive psychological process that is sometimes aggravated by the difficulty to accept a new role in society: that of a grandmother, a pensioner, an elderly and no longer attractive woman.

For this reason, explaining the different conditions that may bear an influence on the transitional deficiencies in vaginal lubrification can help women understand that many other women experience exactly the same uneasy situation, with all the related symptoms involved: it’s important for them to see lubricants as a formulation that can facilitate the expression of their femininity, easily obtainable from either doctor or pharmacist. Nature can therefore once more be of valuable help, offering ingredients of proven efficacy.

Nature can help you in case of vaginal dryness.

Helping women to handle the unpleasant problem of mucosal dryness surfacing menopause is possible thanks to an approach providing for different aspects, all of which are equally important and to be followed simultaneously, so as to ensure the synergic action of different ingredients:

This approach, combined with a healthy lifestyle (in terms of diet, but not only), includes the use of natural remedies that are well known in folk tradition and the efficacy of which in providing valid and effective opportunity to handle the problem has been confirmed by recent studies.

1 - To rebalance hormonal rhythms, modulating the irregular trends generally occurring during menopause…
Nature can help you with…

Soy isoflavones: these substances, belonging to the category of phytoestrogens, are capable of binding with receptors for estrogens (even though less similar), exerting a mild hormone-like action (in fact, they are less powerful, exactly 1000 to 10.000 weaker compared to estradiol). Scientists became interested in studying soy isoflavones after noticing that typical menopausal symptoms were absent in Asian woman, whose diet is instead rich in soy. Epidemiological studies have moreover pointed out that the incidence of degenerative pathologies, of arteriosclerosis and osteoporosis, as well as of certain tumours – affecting breast and uterus, is definitely lower in Eastern countries compared to the West.

The extraordinary nature of phytoestrogens, and isoflavones in particular, lies in their capacity to modulate the action carried out by physiological estrogens, rebalancing their effects. Recent studies have shown that isoflavones exert both an antagonist and agonist action on estrogen receptors. This implies that, with excess endogenous estrogens (a typical situation in the transitional phase in which estrogens dominate over progesterone), isoflavones carry out an anti-estrogenic activity, i.e. they bind receptors, exerting a weaker hormone-like action compared to endogenous estrogens, therefore lowering the general effect. Instead, in the presence of lower hormonal levels (a typical postmenopausal condition), isoflavones exert a weak pro-estrogenic activity, since they occupy receptor sites that would otherwise remain inactivated. This action not only influences the reproductive system but all organs and tissues (bones, nervous system, skin, mucosae, cardiovascular system, etc.): in fact, isoflavones positively influence all menopausal symptoms.

Vitex agnus-castus (also called chaste tree): its berries have a rebalancing effect on the progestogen hormonal component. Their use for menopausal symptoms is explained by their action at the level of the hypophysis where, acting on gondadotropins (FSH and LH), they promote the production of progesterone and contribute to alleviating typical transitional phase symptoms. Moreover, it has recently been discovered that intake of chaste tree stimulates the production of melatonin by the brain, improving depressive symptoms as well as the quality and quantity of nightly rest.

Dioscorea villosa: of Mexican origin, it has been used since Aztec times to treat many female disturbances, from premenstrual syndrome to menopausal symptoms. Among its active ingredients there is diosgenin, a substance with a structure similar to that of progesterone. Evidence of the drug’s use (dry root extract) shows hormone-like effects towards the progestogen component. Its mechanism of action is not yet known: it can act as a phyto-progestin, interacting with progesterone receptors; it can rebalance the hypophysial secretion of FSH and LH or stimulate the hormonal production of the adrenal gland.

The most convenient form of intake of these ingredients comes in swallowable tablets.

2 - To compensate for a widespread nutritional shortage in the Western world (namely, the lack of magnesium) and effectively contrast oxidative stress, responsible for aggravating menopausal disorders…
Nature can help you with…

Magnesium: the widespread deficiency of this mineral, mainly due to soil depletion and refined foods, bears implications for many aspects related to health, ranging from psychic and neuro-muscular spheres, to the cardiovascular, osteoarticular and gynaecological domains. Due to hormonal trends which are typical of fertile life (menstrual cycle, pregnancies, breast-feeding, menopause), women are affected by a lack of magnesium with a frequency that is four times higher compared to men.

In the general, current worsening of menopausal symptoms related to the neurovegetative sphere and mood levels, magnesium plays a vital role, just as in the increase of degenerative, chronic pathologies such as osteoporosis, insulin resistance, hypertension and vascular damage. Whenever there is a lack of magnesium, the action of calcium at the level of muscles and nerve endings tends to prevail. Anxiety, irritability, stress, insomnia, headache, muscle tension and cramps are a direct consequence. Effects at cardiovascular level are even more dramatic (arrhythmias, fibrillation, heart attack, hypertension).

Another consequence ensuing from the lack of magnesium regards bone structure: magnesium is vital to “keep us on our feet an entire lifetime”, in other words, it “saves our bones”. To contrast vasomotor and neurovegetative symptoms, to safeguard the cardiovascular apparatus and protect the bone structure, an intake of at least 400 – 500 mg of magnesium a day is recommended during menopause, to be taken as salts with high bioavailability, of which magnesium citrate represents the best.

Alpha lipoic acid: this is naturally produced at hepatic level (synthesis, however, decreases with age) and it carries out a fundamental role in cellular metabolism of energy; it also protects from the attack of free radicals and reactive oxygen species that damage and wear out organs and tissues. Solubile in both aqueous and lipid cellular fractions, it is active in every body district.

Its extraordinary nature lies in the fact that, while fulfilling its antioxidant function, it passes from a reduced to an oxidized form. Meanwhile, the alpha lipoic acid regenerates C and E vitamins, according to an “antioxidant recycling” process. It is capable of chelating dangerous metals, helping the organism to eliminate them. For these reasons it is considered “king of antioxidants” and is particularly useful for the general protection of the female organism, especially during menopause.

Intake via practical sachets to be dissolved in water is recommended.

3 - To balance pH levels, restoring the ideal condition for the development of residential flora and the physiological hydration of the mucosa, preventing the insurgence of irritative or painful stimuli
Product ingredients

Grapefruit Seed Extract (GSE): thanks to its antibacterial, antiviral, antifungal and antiparasitic activity, which have been proven by numerous scientific studies, it carries out a hygienising activity without negatively affecting the physiological bacterial flora. Such hygienising activity is of great important, given the fact that the product is to be used before sexual intercourse.

Calendula extract: it carries out a cicatrising, emollient, soothing, refreshing and reepithelising activity, thanks to the presence of flavonoids that promote normalization of tissutal microcirculation. Moreover, polysaccharides present in its pool of active constituents make Calendula particularly indicated in case of sensitive mucosae, thanks to its action in rebalancing cell hydration.

Aloe vera gel: besides contributing to the lubricant action, Aloe vera gel exerts an anti-inflammatory effect that has the power to calm and soothe inflamed tissue, helping to reduce painful symptoms of the disorder. Aloe vera’s particular plant steroids are topical anti-inflammatories: their activity is very similar to that of steroid medicines, but without causing any side-effects whatsoever. It moreover activates cicatrisation and immune stimulation processes.

Hydroxyethylcellulose: a cellulose derivate that is ideal to endow the product with a marked lubrifying action, owing to its filmogenic and thickening properties, while fully respecting the vaginal mucosa.

Lactic acid: it regulates pH, bringing it to physiological levels, a necessary function to preserve the integrity of the hydrolipidic film, which allows a correct level of hydration of the mucosae,thereby preventing dryness. Moreover, maintaining a natural, self-defensive pH of the mucosae preserves the intimate partes from contamination by pathogenic agents that might upset the ecosystem’s balance and is therefore essential in the prevention and treatment of infections and inflammations that can affect female genitals.

The ideal means to convey these ingredients is a vaginal gel, enabling targeted use and ensuring good absorption. 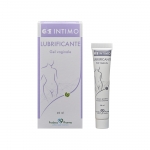 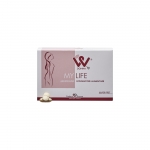